Australia and its marvels – Part I 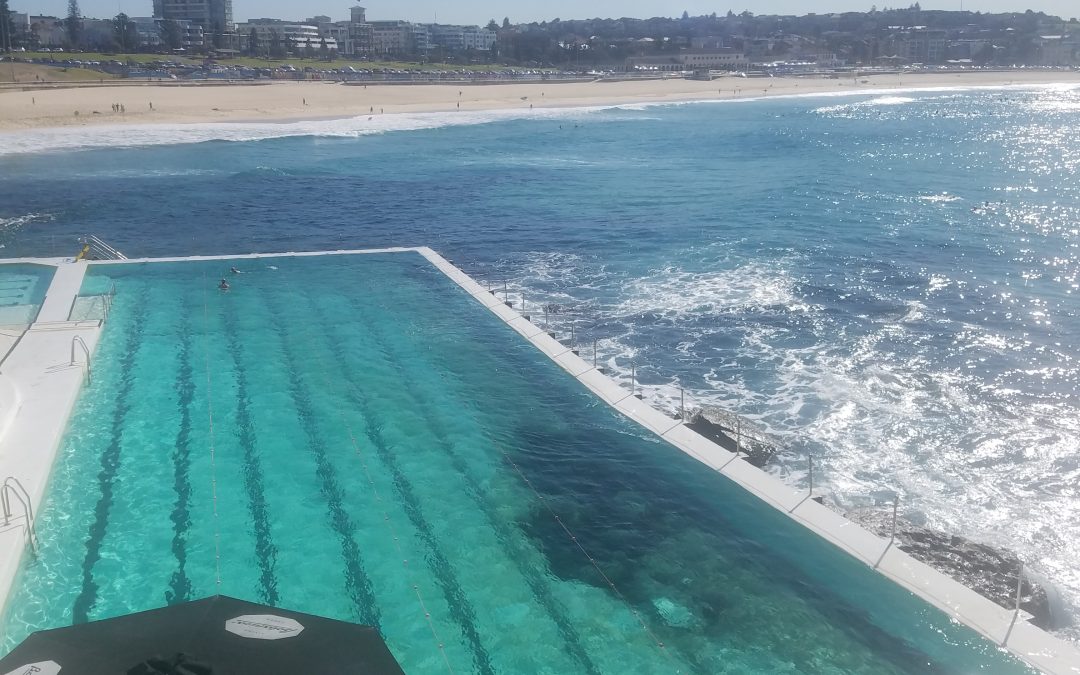 Recently our travels took us to Australia. Swimming the Great Barrier Reef was always on Mr. Allergic Traveler’s bucket list.  It was not on mine, but clearly it was not a torturous affair. To ensure we had the best trip possible, I spent a lot of time beforehand researching. I learned about the vegetation, the animals, the food, all the poisonous creatures, where to go and what to see. We pinched and saved every last dime to make sure we did not miss out on anything while we were there. Add to this, that I studied the food allergy industry first hand as I wanted to see how they navigate our world. In a hypo-allergenic nutshell, Australia is doing everything right! 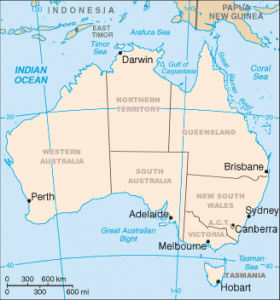 Where did we go?

Geography lesson time… we went to Sydney, Cairns, Brisbane, and The Gold Coast. Essentially what this means is that we spent our time on the east coast, from the south (Sydney) to the north (Cairns). We flew in between destinations. Most people do not realize is how big Australia is.  Australia is just slightly smaller than the US, approximately 25% smaller, (land wise). Its population is roughly 25 million which is close in size to Texas’ population.  To further paint this picture, had we not flown to Cairns from Sydney, it would have taken us 26 hours by car. Probably longer as they drive on the opposite side of the road and this Allergic Traveler would have been screaming most of the way! Each region provided us with a completely different experience and yet there were some things that clearly overlapped.

What about Sydney? Wow! Am I in love! Actually, this is probably one sentiment that will be expressed about all regions. Australia just has it going on. From its people, to the food, to the outdoor activities and animals, there is nothing about this trip that left me thinking “I wish they did this better.” Our trip started off in Sydney at 6 am! Due to the time difference and the flight time, we were in and out of the SYD airport in less than an hour. This was our first exposure to the efficiencies and friendliness of this country and this attitude was alive and well throughout the trip.

Since we were landing so early, I had emailed our Airbnb to see about an early check-in. We never heard back from them, so we figured let’s just wing it and head to the Airbnb. Unfortunately, when we got there, there was no check-in desk and no number to call. What to do? I was stumped. It was a rookie mistake. I pulled up my booking, but I could not for the life of me figure out the country code and how to call. Again, I know better! My husband being the friendly guy he is, said “just ask this nice lady walking by.” I hate doing this! I never want to be an imposition to others. Reluctantly I asked the lady for help. Immediately she said “here let me call them for you.” She did and had to leave a message. After she did this, she proceeded to tell me that she would call me if she heard back from them. “Yeah right” I thought. No one ever does things like this. 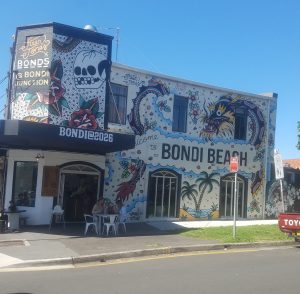 As all we could do is wait, we headed for breakfast. We headed to a little bistro, in the Bondi Beach area, called Dairy to have breakfast. Again, my husband, being the social guy, he is, proceeded to tell the waiter of our situation. The staff was very empathetic and started to make suggestions on things we could do. We proceeded to have a very nice breakfast, mine was egg free and dairy free, his was, whatever he wants! Aside from being very helpful due to our predicament, they were also very knowledgeable when it came to allergies. It was such a welcoming and comforting environment. While our situation was not ideal, I felt completely at ease. And just then the phone rang! The friendly stranger called to let us know that she spoke to the owner of our Airbnb and that he would be calling us shortly. Again, who does that? He did call just after this and met us to allow us to check-in early.  By this point we had only been in the country for 3 hours and we’re completely impressed with the warmth and helpfulness of the Aussies. This sentiment was experienced and witnessed throughout our trip.

What does Sydney have to offer?

I guess a better question is what doesn’t it have? There is such an international influence there. Not only did we get to experience Aussie food, but we also had Lebanese, Turkish, Swiss, Portuguese, and so many others. Typically, when I go on vacation, I lose weight due to my food allergies. This was not the case when I was in Australia. I gained weight! Australia recognizes  the top 14 allergens, unlike the US who recognizes only 8. Australia is dubbed the food allergy capital of the world and I can see why. EVERYWHERE we went, the staff was knowledgeable about food allergies, cross contamination, how the food was prepared, what alternatives I could eat, and every menu had dairy free options, vegan options, gluten free options, etc. The list goes on and on. I could move there just for the food and the people. But wait there’s more! There’s the whole culture that I have not told you about. Ok so back on track, what about Sydney? 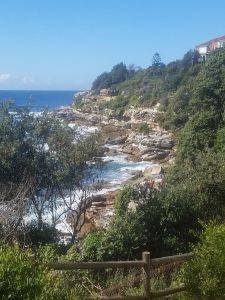 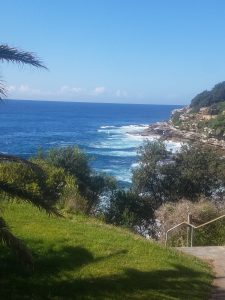 While we were in Sydney, we got to do some pretty cool things. We went to the famous Bondi Beach, where all the surfers hang out. The water was cold, but they did not seem to mind. It was fun being able to watch them. Fair warning, you may see buff surfers walking around, lots of eye candy! There is also a skate park there that is full of murals and kids skating. While you are there, make sure you go see the infinity pool. You will thank me later! 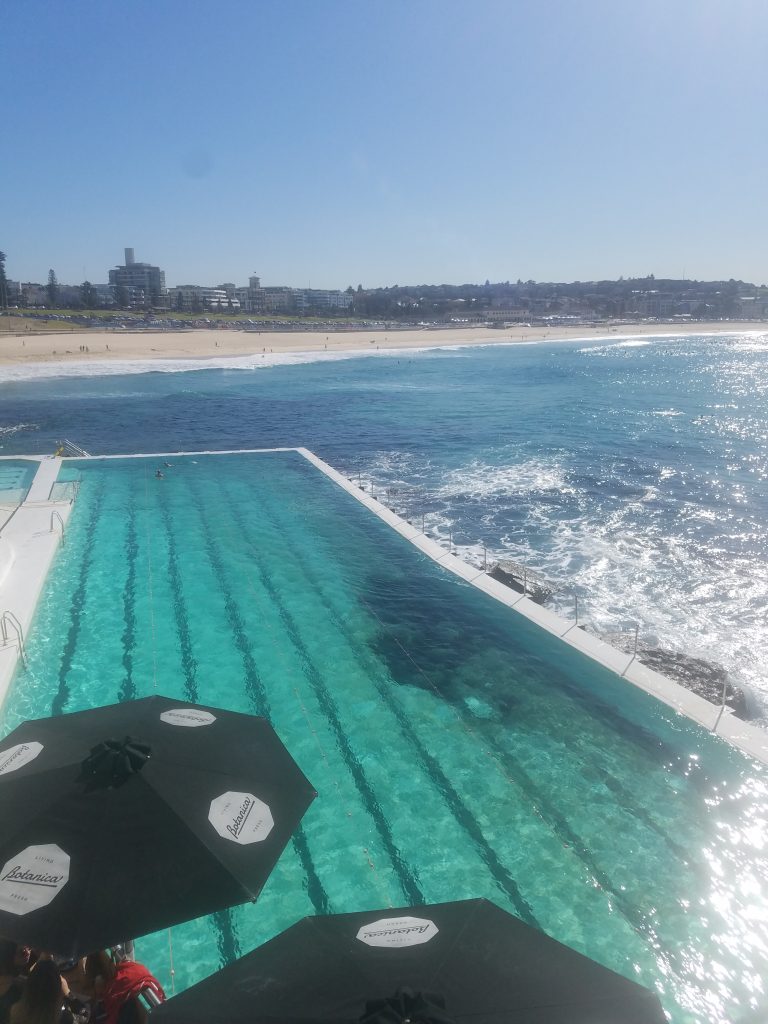 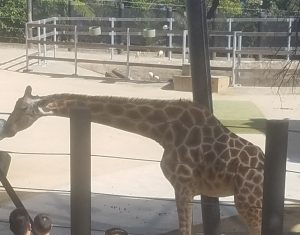 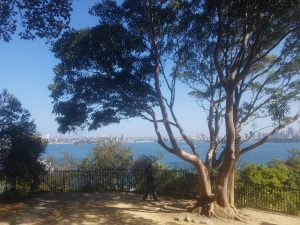 Sydney in the distance

Hanging out at the zoo

We went to the Taronga Zoo, which sits in the Sydney Harbour. Australia has an extensive wildlife which was well represented at the Zoo. We saw giraffes, hippos, kangaroos, wallabies, and so much more.  You could easily spend a whole day here. Our trip back to our Airbnb was via a ferry. I highly recommend this. It gives you a great 360 view of the entire city. Fun fact – apparently the harbor is full of sharks!

View from within Sydney Opera House 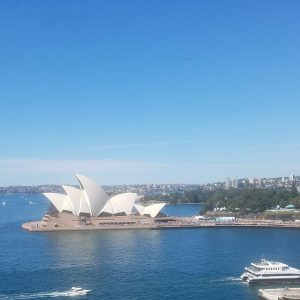 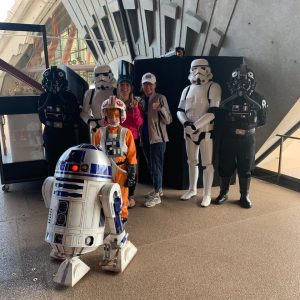 Star Wars at the Opera House

Of course you cannot hang out in Sydney, without going to the Opera House. The building is magical. My stepson suggested we go see Star Wars. The symphony was playing the soundtrack to the movie. I was not sure what to expect.  I assumed we would be sitting there for a few hours listening to various pieces from the Star Wars series. Wrong! We actually saw the symphony perform alongside the viewing of the most recent movie. The choreography on this rendition had to be just perfect. Each performance had to begin and end with the right scene. There could be no overlap. It was majestic! Add to this that we were in a world class building known for its acoustic and architecture, it is an experience I will never forget. 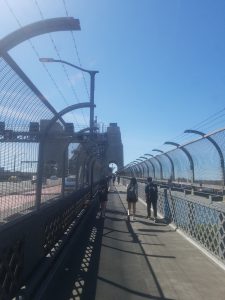 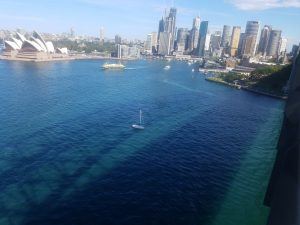 My other favorite experience about Sydney was crossing the bridge. Just to be clear, you can either climb the bridge or cross the bridge. If you climb the bridge, you are climbing the arch. If you choose to cross it, then you are on sidewalk alongside the traffic on one side and your view on the other. I chose to cross it. The view is spectacular. You feel like you are in heaven! Such an escape is a luxury. And to think that there are Sydneysiders (people from Sydney) that walk or run across the bridge every day!

So much to tell from our travels! We will be doing this as three-part series. The posts will run every Tuesday. Stay tuned for next week’s post which will talk about the Great Barrier Reef.

Have you been to Sydney? What did you do? How did you find the people and the food?