This past week end, this Allergic Traveler headed back to Charleston, SC. I try not to go to the same place, as there are so many places to see, but Charleston is special. We went there the first time, about a year ago to meet some friends from Florida. We enjoyed ourselves so much that when we got asked to go back, we simply could not refuse. Charleston is about a five-hour drive from where we live. We made a long weekend and we’re thrilled to be celebrating our anniversary with long time friends. On Friday, we went to a rooftop bar at the Pavilion Hotel, for about 10 minutes! The weather started changing quickly. Thunders storms rolled in and the sky started to turn. Before the weather scared us off the roof, we had the opportunity to enjoy the scenic view, which included the beautiful new Arthur Ravenel Junior Bridge. From a distance, it looked like gigantic sails. It was quite breathtaking. Once banished from the rooftop, we headed to dinner.Walking through the downtown area, we headed to Cesca. This Italian eatery was a complete pleasure. Jason Colonne was the head chef that took care of my food allergies and me. The owners, originally from New York were happy to have us. It was wonderful having New York cuisine so close to home. They were very appreciative of the fact that I had my Allergic Traveler card.  The waitress took it immediately and headed to the kitchen. She came back with a list of possibilities. Not only were they not thrown off by my food allergies, but they also welcomed the challenge. Charleston has a lot of restaurants, and t 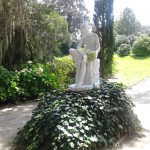 he competition is fierce. If they know they can cater to your dietary needs, then they know you will be coming back.

The following day, we spent it at Middleton Plantation. It was spectacular plantation that showed how they lived back pre civil war. Unfortunately a lot of the plantation had been burned during the war, leaving only one out of three of the estate homes. However, the land was well kept. The butterfly pond was unusual and pristine. The stables highlighted some of their different trades from the area, while also housing horses and birds. I don’t want to give too much away. You need to check it out yourself!